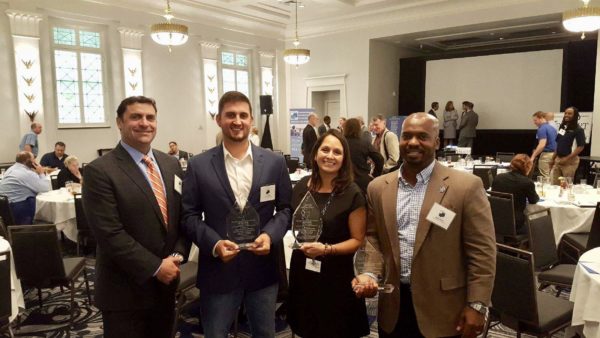 The Construction Management Association of America (CMAA), Gulf Coast Chapter, presented Compliance EnviroSystems, Royal Engineers & Consultants, and the City of New Orleans Department of Public Works with the 2018 Project Achievement Award for the Emergency Catch Basin Cleaning Program at the Regional Infrastructure Conference on August 16, 2018, at the New Orleans Hilton. The award recognizes outstanding achievement in the practice of Construction Management.

New Orleans Mayor Mitchell Landrieu and Louisiana Governor John Bel Edwards declared a state of emergency in New Orleans in response to the rain events that overwhelmed the city’s drainage system on August 5th, 2017. Officials and residents scrambled in the aftermath of the massive storm that dropped almost 10 inches of rain in many parts of the city and damaged a couple of hundred properties. Director of Public Works for the City of New Orleans, Dani Galloway, proposed the Emergency Catch Basin Cleaning Program to City Council.

With more rain in the forecast for the following week, New Orleans leaders rushed to deal with a series of malfunctions in the city’s drainage systems. The storm drainage system contains approximately 68,000 catch basins and over 1,000,000 linear feet of storm drain laterals varying in type and size. Catch basins were in need of significant cleaning and repairs, and the urgency for these cleaning and repairs was elevated due to the consequences of the flooding. 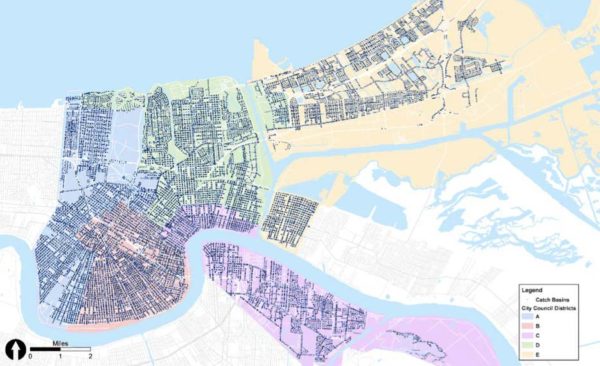 New Orleans has struggled with its unique drainage system for years: pumps are in need of repairs, catch basins repeatedly clog, and potholes form seemingly everywhere. Because of the city’s unusual topography, with many areas below sea level and protected by levees, pumps in every neighborhood must extract rainwater out of storm drains and canals and push it into a nearby lake or other bodies of water, work that is typically done in other cities by gravity.

The program began on September 26, 2017, with six combination cleaning/vacuum trucks. Within a week’s time, CES ramped up to 15 cleaning trucks. By the third week of the program, CES and its subcontractor were operating 23 vacuum trucks throughout New Orleans. By January 23, 2018, the program end date, CES successfully cleaned 15,300 catch basins and removed 7.2 million pounds of debris. 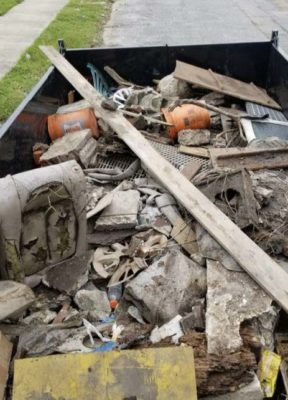 CES and subcontractor employees logged a total of 26,868 working hours over the duration of this project and had zero reportable accidents, a tremendous feat on a project with so many moving parts and an abbreviated timeline for completion.

While the Emergency Catch Basin Cleaning program was conducted under a state of emergency, Public Works believed that it was essential to maintain the integrity of the city’s business diversity efforts through procurement. CES’s cleaning contract required a 35% disadvantaged business enterprise (DBE) goal and a 35% local hire goal. CES had an excellent team of industry professionals on board to assist in tackling this challenge. Helping CES with this project were four local, disadvantaged business enterprise (DBE) and woman-owned business enterprise (WBE) firms. Blue Flash, Supreme Developers, and the Beta Group supplied many vacuum trucks and Traffic Solutions provided traffic control products and services to all cleaning crews for the duration of the project.

CES is proud of its accomplishment of meeting and exceeding the CNO’s DBE/WBE utilization goal of 35% with a 38% utilization. CES is also pleased to report that the local city of New Orleans residents supplied 60% of all employee hours (CES and subcontractors) logged for this project. This is invaluable to the city of New Orleans because it maximizes the economic impact of the city’s contracts. 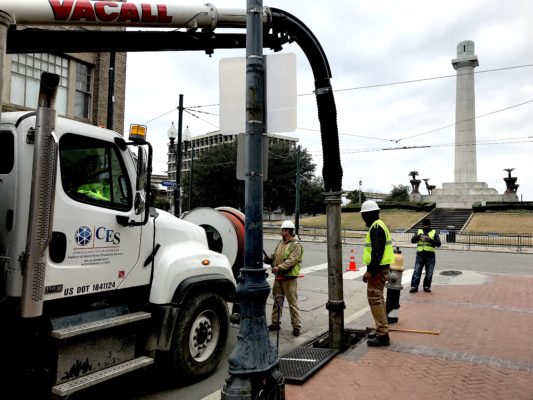 Public Works and CES dealt with many challenges along the span of this project. Through all of the adversity, CES and its subcontractors successfully cleaned 15,300 catch basins in 120 calendar days and removed an extraordinary 7.2 million pounds of debris (93,000 pounds were Mardi Gras beads!). We are confident that this program made a significant impact on the lives of New Orleanians and will help prevent severe flooding in the future.