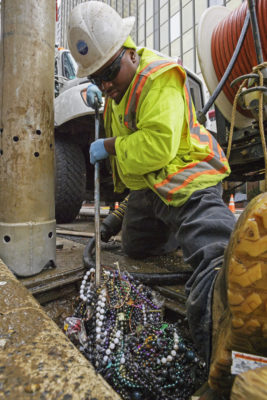 CES crews were in the news this week for cleaning catch basins on St. Charles Avenue in preparation for Mardi Gras season in New Orleans, Louisiana. The celebration begins early in the city that never sleeps. Parades kicked off last Saturday and will roll until Fat Tuesday, February 13th.

25 million pounds of Mardi Gras beads are tossed from floats and balconies every year. Ever wonder where they go?

The tradition of throwing trinkets in parades started in the early 1870s. Mardi Gras beads are the most coveted throw for parade-goers, but we don’t often think of the negative environmental impact. Beads can accidentally enter storm drains, which enter into Lake Pontchartrain and the Mississippi River, which drains into the Gulf of Mexico.

The image in the top left corner, captured by The Advocate, shows a CES employee pulling a jumble of beads out of a storm drain. With the help of CES, over 70,000 pounds of Mardi Gras beads have been removed out of the catch basins that line St. Charles between Lee Circle and Poydras. Be a part of the solution and learn how you can recycle beads for a great cause here.